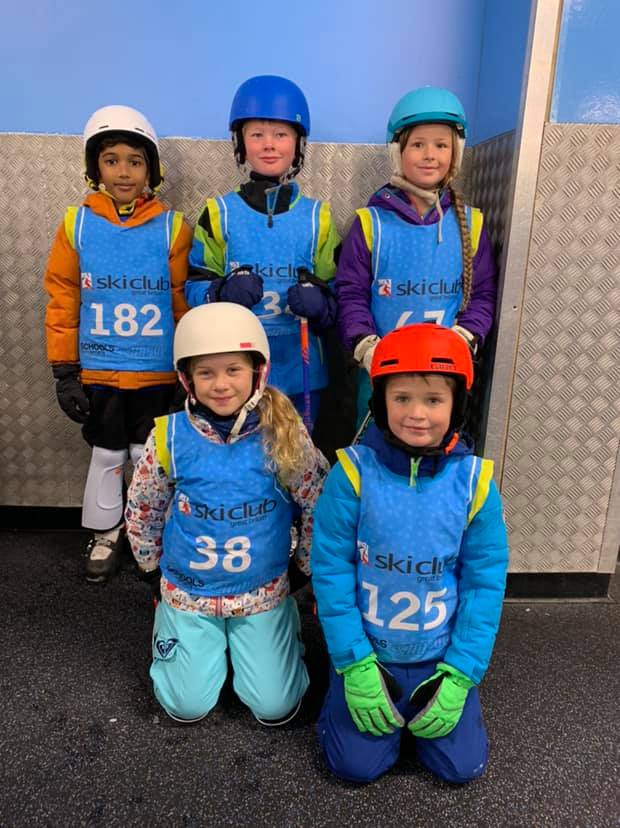 On Monday The Grove Ski teams headed to Hemel Hempstead for the National School Indoor Ski Championships. We arrived nice and early and the children all changed and went onto the slope for their warmup. Following the warmup, they had a quick break and team talk before heading back onto the slope to inspect the course. During the course inspection the children are not allowed to ski round the gates they have to view the course from the side of the slope making it hard to know exactly what to expect when they come to race.

The girls were first to race, Elise Reeson skied very well really attacking the course and put in a very good time of 15.68 putting her in 3rd place! Sophie Hartley-Wiley followed with another good run and a time of 16.66. The boys were next and Jacob Millburn was very excited to get on the slope having watched the girls race. Jacob skied a good race with a time of 16.87. Frederick Lancaster was next, he went out of the starting gate very fast and unfortunately just missed a gate meaning he was disqualified from this run. Kyle Dissanayake went last for the boys skiing a clean race with a time of 18.59.

Following a quick break, it was time for the girls to go back onto the slope for their 2nd run. With both girls having completed their first run successfully and recorded a time they were both going to go as fast as they could to try and improve their positions. With the snow starting to soften the temperature had been lowered on the slope to help maintain the snow meaning a few patches of ice had started to form on some turns making the course harder so ski than their first run. Both girls skied the course successfully but unfortunately neither of them managed to improve on their first run. The boys were next this time in reverse order, so Kyle skied first, again the boys course was starting to develop some icy patches which was catching out a lot of the skiers. Kyle skied another good run but again didn’t quite manage to improve on his first run. Freddie was next and was determined to ski a clean run this time and he did with a time of 19.99. Jacob went last and by now a lot of children had been disqualified with many children missing the last gate, Jacob made a great last turn and just brushed inside the final gate with a time of 17.87. We now just had to wait for the final results to be confirmed.

After lunch and a long wait the results were in! Elise was placed 4th in the Girls U10 race a great achievement and Sophie Hartley-Wiley came in 10th place in the Girls U12. The girls team were placed 4th overall a really good result as they were one member short on the day with Alice Alder sadly unwell. In the boys U10 competition Jacob came 11th place and Freddie 33rd great results out of a field of 56 U10 boys. Finally, Kyle placed 30th in the U12 boys again a great placing out of 51 U12 boys. The boys team came 8th overall.

Congratulations to all those who took part! They all did brilliantly, really encouraged each other and came together as a team. We have never seen so many disqualifications for missed gates before so they all did exceptionally well!

We look forward to the next race in April.

View the embedded image gallery online at:
http://www.groveindependentschool.co.uk/index.php/component/k2/item/467-biss-ski-championships-hemel-hempstead#sigProId3ebca19871
More in this category: « U10/11 Boys Rugby vs Broughton Manor U8/9 Hockey vs Quinton House School »
back to top