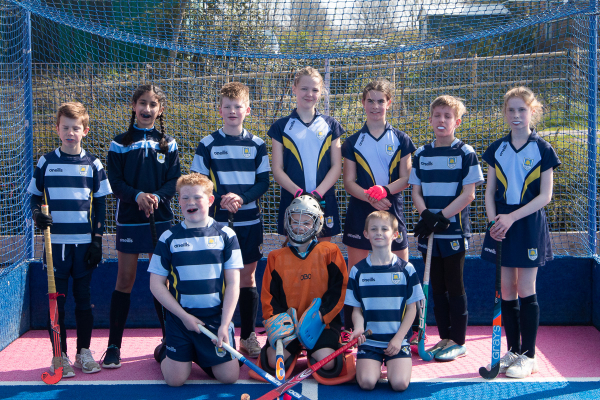 On a sunny warm spring afternoon a squad of 10 boys and girls travelled down to Old Loughtonians Hockey Club.

The boys and girls started their first game well by moving well across the Astro. Avon House managed to get two goals in the first half to make it 2-0 at half time. In the second half we played with more purpose by moving the quickly forward which resulted in a great work team goal to make the scores 2-1. Some great goalkeeping and defending kept Avon House out however with 2 minutes to play Avon House managed to get another goal. Final score 3-1 to Avon House.

The second game was against Norfolk House school. A strong start from us by moving the ball around and again attacking with purpose resulted in Norfolk House defending deep and their keeper pulling off some great saves! 0-0 at half time. In the second half some good interchange from defence to midfield allowed us to create space upfront however Norfolk House held strong to get a draw!

Our last Group game was against host school Gatehouse. Gatehouse started the strongest of the teams by testing us defensively. However even with some great defending gatehouse managed to grab a two goal lead at half time. In the second half we started the better of the two teams with the gatehouse keeper making some great saves. Unfortunately gatehouse hit us on the break to score one final goal. 3-0 full time.

After the group stages we then played Immanuel School. As a team everything clicked! The Girls & Boys played some lovely passing hockey to allow space for two well worked goals! The final score was 2-0 and that put us into the 5th v 6th place play off final.

The 5th v 6th Play Off final was against Salcombe Prep. Again the Girls and Boys moved the ball well out wide which allowed space up front for us to take a 2 goal lead at half time. In the second half we moved the ball well however, Salcombes keeper kept pulling of some great saves to keep the score at 2-0.

The team finished 5th and that’s down to all the Girls & Boys attitudes and never give up mentality. We did have the hardest group with both Avon House and Gatehouse meeting In the final.

Well done to all involved today.