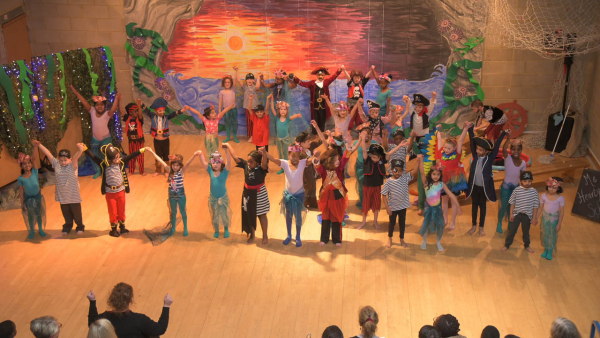 Pre Prep have spent this half term emerging themselves into the world of the great rivalry between Pirates and Mermaids. This rivalry is fiercely competitive and the children quickly discovered that there was lots of differences between the two. The mermaids are sassy and flashy and the pirates are rugged and tough. The story is set on the Seven Seas as the latest recruits from Me Hearty High School discover that in order to pass their ‘Arrrrr Levels’ and become fully fledged pirates they all actually need to learn to swim. However the only people that can help are their arch enemies, the Mermaids! Captain Scareypants, played by Nathan Awoyemi, and his trusty crew lead by Ace, Scar and Gangrene (George Smith, James Alder and Benny Roberts) must discover the mermaids hide out before it’s too late and they all fail their tests. As well as his crew the young and naive Captain has his trusty carrot at his side. His crew finally tell him that actually proper pirates do not have carrot sidekicks they actually have parrot sidekicks. Although disappointed his crew deliver him exactly what he needs a parrot. However this parrot is no ordinary parrot it is the Crazy Parrot, played by Olivia Taylor, who is incredibly annoying to Captain Scareypants and his crew. However the parrot becomes part of the crew, for now! The pirates discover the mermaids cave hidden in the fog and the mermaids are not happy that their secret hideout has been discovered. Captain Scareypants demands to be taken to the leader, the Mermaid Boss played by Onyinyeomachi Iwuagwu. The lead mermaids Atlantis, Neptuna and Scampi and Chips (Dabira Akande, Joella Bennett-Shamamba and Chloe Hudson) all laugh with hilarity when the pirates explain they cannot swim. They finally agree to help the pirates on one condition, Captain Scareypants has to say out loud that “Mermaids and better then Pirates.” He reluctantly agrees and the mermaids throw a pool party in the deep blue sea for all the pirates and teach them to swim, with wonderful synchronised ability! As a thank you Captain Scareypants gifts his Crazy Parrot to the Mermaid Boss. In the end the pirates all pass their Arrrrr Levels and guess who came top of the class? Yep Captain Scareypants! Although the mermaids and pirates will never be best friends they learn that they may not always love each other but they will always love the sea.
What the children of Pre Prep were able to produce was fantastic and we are all immensely proud of them. This was actually a play written for Year 4 so it is true credit to our children that they were able to deliver the performance that they did. We all felt privileged to work with the children and be able to show their parents how wonderful they truly are. Mrs Collins
Read 412 times
Tweet
Published in General