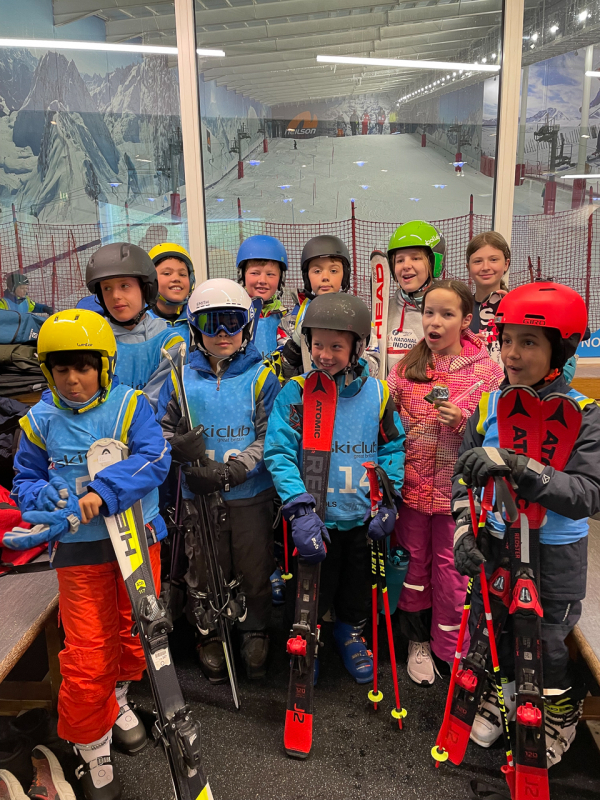 On Monday 25th April our team of 11 ski racers headed to The Snow Centre Hemel Hempstead for the English National Ski Championships. Our ski race team train for 2hrs every Monday however, after 4 weeks off over Easter they were all a little nervous. The girls arrived first and headed onto the slope to warm up and quickly calmed their nerves once they were skiing. Following warm up they had time to inspect the course. The U10 and U12 boys and girls race round a short poles or “stubbies” and the U14 boys and girls race a separate full poles course. If you miss any gate or ski outside the course you are disqualified from that run. Each racer completed two runs with the fastest time to count.

The girls were all lined up in bib order and ready to race. Elise Craig was the first of our girls to race in the U12 competition and completed a fast run. Sophie Hartley-Wiley was the first of the U14s to race and confidently skied all the gates cleanly. Alice was the last U14 girl finishing the course very quickly. They all returned to the top of the slope for their 2nd run to see if they could improve their times. The girls all came off the slope happy and quickly changed to wait for the results. They were very pleased to hear Alice and Sophie had both received medals with Alice finishing 2nd and Sophie 3rd in the U14 girls race. Elise finished 13th overall a great result for her first year as an U12.

The boys were next and with just over twice as many boys racing as girls the slope was busy for their warm up but they all warmed up and inspected their courses before getting ready to race. Timothy Lancaster was the first of our boys, he really attacked the course skiing very fast and unfortunately fell over just in front of the finish line but got up and skied over the line to register a time. Helios Mesonero Perez was next and skied very confidently. He was followed by Frederick Lancaster, Alexander Pearce, Alexander Briscoe, Aron Sonander and Arjun Sohal who all skied clean runs. Tomas Garcia was racing in the U14 category and skied the full gates course, unfortunately he skidded early on and went off the course but continued to the bottom. Having missed a gate Tomas was disqualified from the 1st run but would have the chance to try again for his 2nd run.

The children were all very pleased with their racing and all had fun analysing each other’s runs on the way back to school!

We had to wait until the next day for the full team results. Anyone placed in the top 10 gain points for their team with first place awarded 10 points through to 10th place awarded 1 point. We were very pleased to find out our A team Sophie, Alice, Freddie and Aron came 1st place in the mixed team competition and our B team Alexander Briscoe, Alexander Pearce, Timothy and Tomas came 7th in the boys competition.

Congratulations to all the skiers!

View the embedded image gallery online at:
http://www.groveindependentschool.co.uk/index.php/component/k2/item/590-english-national-ski-championships#sigProIdb688661b01
More in this category: « ISA U11 Hockey Tournament
back to top