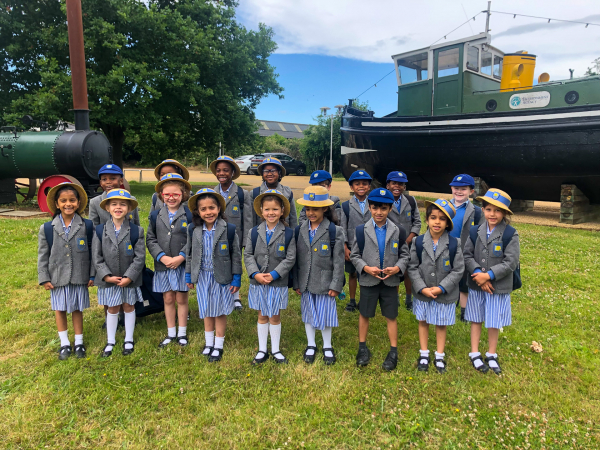 As we approached Milton Keynes Museum, this morning, the children of Larch and Rowan excitedly pointed from the minibus windows. They had spotted the huge boat and traction engine which were sitting in the car park. We were looking forward to an interesting day out!

During the morning session, we were given a tour of the exhibitions outside the museum. The children were full of curiosity and questions for our guides. The topic of the term has been ‘transport’ and we were given plenty of detail about each method of transport which we encountered. Whether it be a penny farthing, the biggest tram in England or a giant steam engine, there was a lot to learn! We even said a special ‘Hello’ to the original concrete cows, which reside at the museum. We were then introduced to the blacksmith, who carefully explained his role and the process of using bellows to provide air for the fire. He also demonstrated how different shapes can be made by manipulating the hot metal, using a hammer. He was extremely impressed with the scientific nature of the children’s questioning and they were given a horseshoe to bring back to their classroom, as a souvenir of the day.

We enjoyed an al fresco lunch on the lawn and had a chance to play in the playground, before resuming our tour of the museum. The afternoon brought more opportunities to learn about history and we accompanied the children to the old school room, where a rather stern ‘school master’ tested their literacy and mathematics skills. We soon found out what expectations and punishments were like for Victorian children. The boys were particularly dismayed by the fact that girls were always allowed to go first, during this era. Although, nobody was happy about the ‘seen and not heard’ business, either. We soon moved on to observe some of the artefacts in the ‘Victorian Street’: A cobblers, pharmacy, butcher’s shop, and hardware store were on our path. Finally, we learnt about Victorian servants and some of the children volunteered to try out the manual vacuum cleaners, before finding out what a ‘commode’ is for.

We were delighted to take the children on their first school trip in such a long time. I am sure this will have been a memorable and enjoyable day for them all.

View the embedded image gallery online at:
http://www.groveindependentschool.co.uk/index.php/component/k2/item/601-larch-and-rowan-trip-milton-keynes-museum#sigProIdd6f8bfd3b0
More in this category: « Acacia and Pine Trip | Warwick Castle 2022
back to top