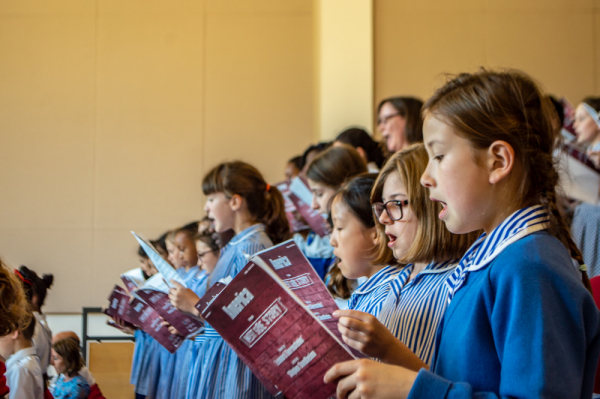 Our Senior Choir felt very excited to be going to Stowe even though unusually they hadn’t had much time to learn the music before going. Instead they, together with the other two choirs that took part, were able to work on the notes during the rehearsals and by the end of the day could confidently sing ‘America’ by Bernstein, ‘Rhythm of Life’ by Coleman as part of a workshop/concert and a three classical choral works that were sung in a simple service of Compline in the Stowe Chapel.

The girls had a wonderful day and were complimented often on the beautiful sound they made as they were asked to sing various parts on their own.

Once again we were looked after so well by the wonderful music department who always seem thrilled to see us and treat us to lots of lunch, tea and snacks! Oh and a stunning concert given by three Stowics; a singer song writer in year 9, a tenor soloist in year 12 and a girl in year 13 who sang a song from a musical. They were outstanding!

I felt very proud of our pupils who seemed to easily cope with the intense rehearsal and who remained so well behaved and full of life throughout this glorious spring day of music making.