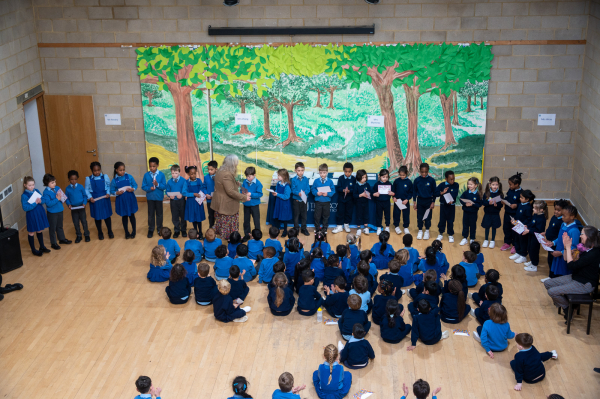 Our achievement assemblies take place once a month, for the whole school, at the end of each month during term time.We start the assembly with our Foundation and Pre-prep class awards where two children from each class are awarded a Class Award either for exceptional effort with something or an outstanding piece of work. We then award any children in Pre-prep with their Star Awards for anyone who has achieved 25, 60 or 100 stars this term. Well done to all the children for this months awards.Next we handed out the MK Festival certificates and and medals for the Drama festival the previous week with a total of 43 certificates and 11 medals awarded!These were followed by some Swimming medals for Frederick Lancaster and Alice Alder who took part in the Oxon and North Bucks County Championships in January.We then awarded the Acacia and Pine (Year 6) science prizes which went to Lily Gibbin, Aaryan-Krsh Sagar, Emily Foster and Tabitha Simpkins, we will tell you more about their projects next week.The U11 boys hockey team then received their medals and trophy for their 1st place in the shield tournament in the ISA national hockey tournament earlier in the month. Each month Credit certificates are awarded to anyone in Prep who has achieved 25, 60 or 100 credits. Congratulations to Aron Sonander who received his 25 credits in February the first Prep pupil to reach 25 this term. For pieces of work above a credit level we award a Commendation which are for exceptional pieces of work. Well done to Sophie Hartley-Wiley for your Commendation for your Spanish work, a fantastic achievement. We finish the assembly by awarding the credit badges for each house which go to the pupils in Junior, Mid and Senior prep with the most credits for that month, they keep the badge for the whole month. Well done to George Payton, Aron Sonander, Sophie Hartley-Wiley, Ipsa Rachaik, Alexander Pearce, Oyin Omotosho, Kacie Padhiar, Patrick Kingsman Shreyan Kothari and Anirudh Balaji for winning the badges this month.We finish our assembly with our own birthday song for all the pupils and staff with birthdays in February.Well done to all the children who received something this month and we look forward to seeing what you can achieve in March!